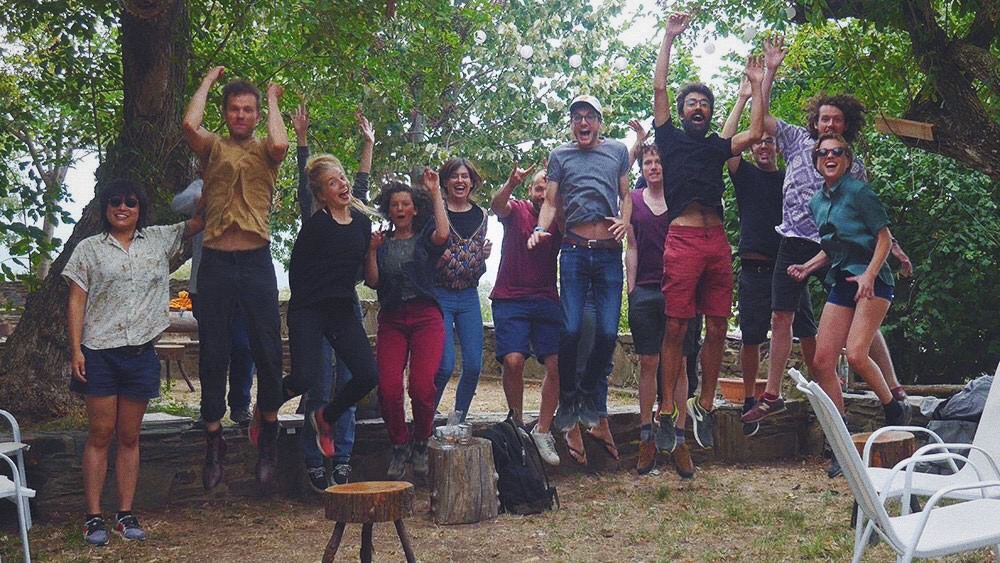 In the last two years my work has been shifting, out of pokey music venues and into public spaces, away from the confines of 4min pop songs and into more contemporary compositions, facilitation and even installations.

What I miss most about being in a band is collaboration, so when I got accepted onto the Audiotalaia Summer Camp this is what I was most excited about. Living and working with 15 like minded individuals from around the world and collaborating on new and exciting work without the worries of everyday life. Needless to say, it didn’t disappoint.

Day 1: Getting Lost in Sound

After spending a few days in Barcelona, I took the train north to Sant Celoni and before I knew it I was in a hostel on the side of a mountain. After an evening of learning names and some very cheap wine (a reoccuring theme throughout the summer camp) we promtly rose at 9am the next day to talk all things sound art, who we were, what we do and what we wanted to gain from summer camp.

Later that day we hiked up the mountain and armed with our trusty portable recorders were tasked with exploring the surrounding area and then walking back – all in complete silence, using just our super sensitive microphones to hear. Theres something powerful about a large group of people in complete silence, focusing on every little sound.

Picking up the soldering iron is something I’ve been wanting to do for a while, but always feltt it was beyond me. Well, on Day 2 we made our very own contact and binaural mics. It filled me with confidence for all sorts of new projects, which is amazing!

Each day on camp saw us split into a new group, randomly, and tasked with a new activity. Day 2s challenge was to make a soundscape recording. After teaming up with Rafa and Jose, we decided to explore how our presence effected the sound of our surroundings.

For this recording, we found a particularly noisy bush, full of crickets, placed my Roland R26 on the floor and after walking around it we promtly walked into the distance. What you hear next is the sound of nature returning as we disappear and then eventually come back.

Using our new found soldering skills, Day 3 saw us tasked with creating a piece of installation art somewhere in the nearby surroundings. I teamed up with Soeria and Estelle and we began to discuss ideas. Estelle mentioned she was struck by how arid and dry the landscape was, which meant there was little bird life – instead mostly insects (plenty of mosquitos though). So, we sought about bringing water back to the landscape, and the life it brings with it.

Behind the house was a now disused pen, complete with abandoned drinking point for the horses. We recorded some donkeys in a nearby pen drinking from their water trough and using a small MP3 player, portable battery pack and small speaker we brought life back to the pen.

Because this field was on a slope it had a run off ditch for when it rained, directing the water down the hill. For our second installation we recorded various uses of water from the house (kitchen sink, shower, water jugs etc.) and used these to highlight how we waste water. This was field was also quite close to the house, so it draws comparisons to a water feature also. Interestingly, we positioned the speakers vertically (one by the top fence post, the second on the floor) which made the installation far more immersive.

By sheer coincidence, today was World Listening Day – which this year had the tagline of ‘listening to the ground’. Working with Itxaso, Evan and Joost we devised a performance which would represent ‘a day in the life of the ground’? We rigged up a contact mic in a bowl of dirt and gravel, created a xylophone from pitched piece of rock, circuit bent an old Casio keyboard and connected Itxaso’s Cello with MakeyMakey – allowing her to trigger loops by pressing different strings (which I then warped and effected).

A well deserved day off saw us hike down the mountain to the river. Edu, our leader, had no idea what we’d find down there – so when we stumbled upon this little slice of paradise it blew our minds. Having been surrounded by dust and dirt for a few days, this felt like an alien landscape.

We swam, skimmed stones and recorded lots of water sounds (of course).

Summer Camp would culminate in a pop-up exhibition/concert, for the local villagers and friends of Edu from Barcelona. The task was to put together an evening of sound art in the shadow of a derelict church, Sant Susana, which showcased all the different ideas we’d been exploring throughout the week.

After surveying the field we’d be using, I teamed up with Soeria to work on an interactive headphone/tree installation. Filling the tree with microphones, the plan was to exploring micro and macro sounds, those close and those faraway.

After some experiences, we realised all the microphones in the tree (contact, piezo and binaural) filled out the mid and high frequencies, so we added a subtle backing track to fill out the low end frequencies. It also gave the impression that you were listening to the beating heart of the tree, the rumble of its engine.

In Catalan you ‘touch’ rather than ‘play’ musical instruments, so with help from native speakers we chose the title “Toca L’arbre I Escolta’l / Touch The Tree and Listen”. By hanging wooden utensils and a bow from the branches, we encouraged people to interact with the tree and by extension with each other. One listens, one interacts – then they swap and try again.

With the final night upon us, despite broken skin, broken branches and even a  broken phone – It was beautiful to see people playing, laughing and collaborating together around our installation.

Summer camp was an incredible experience, an opportunity to take risks and experiment with expert guidance and support from those around you. It filled me with confidence and did wonders for my self-esteem. It reminded me to keep being ambitious, try out new ideas and not to be scared of failure. Summer Camp showed me the importance of ‘play’, creativity for no other purpose than because we wanted to – and it was beautiful.

I feel grateful to have met so many kind and talented people, I won’t forget the week any time soon.